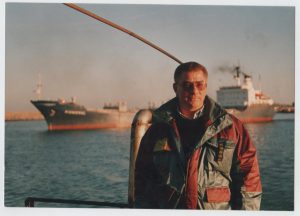 Carlos joined the nautical activity at the beginning of the 70’s, fulfilling tasks in dredgers, overseas vessels and fishing vessels. From the hand of his brother Rodolfo (“Pocho”), who was already working in tugboats both in the port of Necochea and in the port of Mar del Plata, Carlos started in the towing service in Mar del Plata, which at that time, was provided with the tugboats “ONA COCHELO”, “358”, and “MONTEVIDEO”.

Faced with the unfortunate physical disappearance of Carlos Di Napoli on April 15, 2007, Néstor Di Napoli (co-founder) and Sergio Di Napoli (present from the very beginning of the activity) continue to lead the venture.

In August 2009, but not before overcoming a series of obstacles, the company incorporates a new unit: the B/T “CUARTEADOR”.

In order to retain the services with its customers, but also aware of the situation of the moment at the port of Mar del Plata, the company makes a qualitative and quantitative leap for the port of Mar del Plata, incorporating the B/Tugboat “KYOKKO RUA”. With this acquisition, the company currently has two units and increases the safety standards.

The objective achieved prompted the company to continue growing and, at the same time, supporting the port of Mar del Plata, while seeing the progressive rate of its growth. The company has an administrative staff, a body of professionals, and highly qualified crew members, with a vast experience acquired over the years, with a total support for the realization of the envisioned objectives.

It is the policy of the company, the constant renovation, modernization and repowering of the service, without diverting attention from the gradual improvement of the Port of Mar del Plata and the opportunities it offers.

Based on this, in March 2017 Remolcadores Mar del Plata fulfilled an old desire: the purchase and commissioning of the FIRST TUGBOAT WITH AZIMUTAL SYSTEM for the port of Mar del Plata, named “REMARSA I” (formerly “Ultramar X”), and acquired to Antares Naviera.

Not satisfied with this, at the end of 2017 we were able to charter the «TORNADO» bareboat, also with the azimuthal (Z-Peller) system, thereby maximizing the safety, efficiency, compliance, and quality of service standards.

This constant business effort, carried out with own resources, brings greater tranquility to all port actors (consortium, pilots, clients, operators, PNA, etc.) in the operation for the entry, exit and transfer of ships or other naval artifacts; giving the possibility of serving a diverse range of maritime and river services.